Sandhurst and the Sheikhs

On March 5th last year, 2013, while discussing possible ideas for the BBC Radio 4 commissioning round, I sent an independent production company, Whistledown, a short email summarising an idea I’d had:

Five reigning Arab monarchs have passed through the Royal Military Academy Sandhurst: the kings of Bahrain and Jordan, emirs of Kuwait and Qatar and Sultan of Oman, alongside a long list of lesser sheikhs and princes. Sandhurst recently sparked outrage by accepting £3m from Bahrain and £15m from the UAE to rededicate two buildings. Using archive, analysis and new interviews, we examine Sandhurst’s longstanding links with Gulf royalty over six decades, explore how it treats its royals, and assess the ‘Sandhurst influence’ on the ongoing Arab Spring protests across the region.

There were mistakes in there (it’s not five, it’s four – the previous emir of Kuwait went to Sandhurst, but not the current emir – and the UAE donation was for a new building, not to rededicate an existing one) – but the idea stood. Whistledown longlisted it. Then the BBC shortlisted it. Then, incredibly, Radio 4 commissioned it. That was July 2013. Whistledown assigned a producer, the wonderful Karen Pirie, and we started work together, her and me, in December.

I’ve spent my life working alone. Writers do. I thought I’d be doing it again here, planning everything, setting it all up, writing everything. And similarly Karen – used to working with presenters who get parachuted in at the end of a production, to conduct pre-selected interviews and read a pre-prepared script – thought she’d be doing everything herself.

In the end, after working out where we both stood, neither of us did everything. We collaborated. And, speaking personally – what a revelation. Tremendously exciting. Two people with different approaches, complementary skills and a (small) budget to make things happen – it may be what normal people do every day, but not me. What a refreshing, liberating way to work.

Planning began in January. There was a visit to the BBC archive in May. We did interviews in June and July, and after a frenetic few days of writing and rewriting, I recorded my links in studio and on location at the beginning of August. A few days later, Karen finished her edit and the programme was complete, under Whistledown’s title “Sandhurst and the Sheikhs”.

Here is the 28-minute programme – the original BBC page here, and a duplicate at Soundcloud here. I hope you agree with me (and Whistledown, and Radio 4) that it is a programme worth making, and a subject that deserves more scrutiny than it gets.

BBC News Online commissioned a stand-alone feature to run in tandem – here it is.

A couple of weeks before broadcast, the BBC media centre put out a press release, which was picked up here and there. Radio Times named the programme one of their picks of the day, as did the Sunday Times. 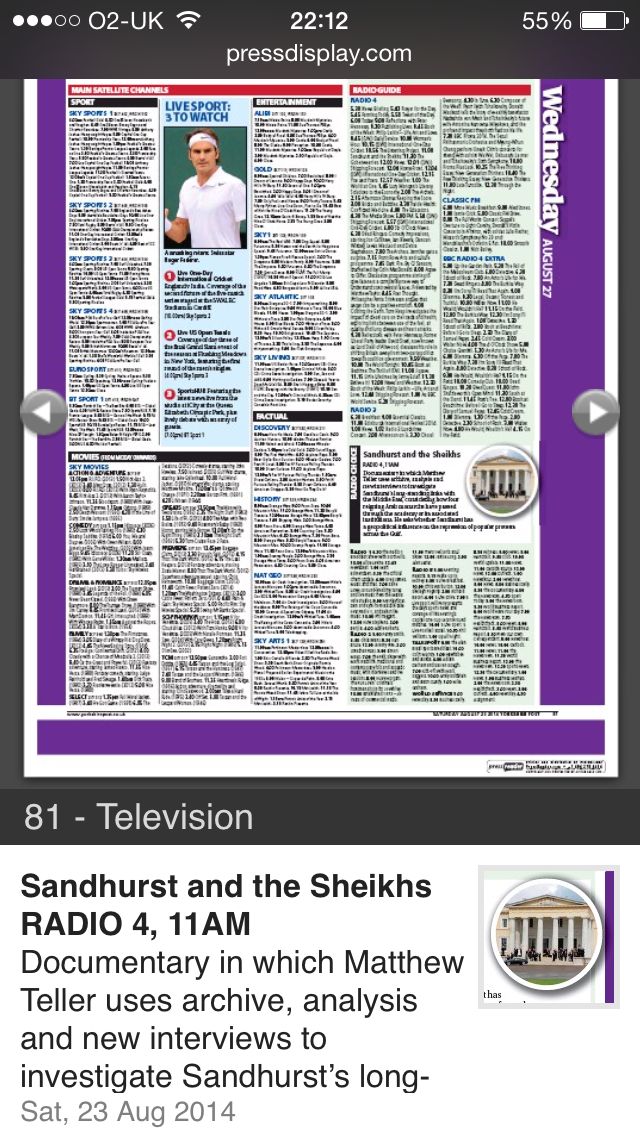 There have been some very nice tweets and emails – thank you to everyone who responded.