I blogged in detail here about Episode One of the BBC’s travelogue The Frankincense Trail, where Kate Humble travels across the Middle East. Episode Two was, I thought, much better – an absorbing (and probably unique) hour of prime-time terrestrial TV devoted to showcasing Saudi Arabia as a tourist destination. There was, fortunately, much less fooling around on camels and much more intelligent insight into previously unseen or unknown aspects of Saudi and Arab society. A few mistakes here and there – notably calling anything smoky and/or fragrant ‘frankincense’, even though it was more often oud or bakhoor – but otherwise excellent. It’s about time a city as beautiful and atmospheric as Jeddah got more attention from the mainstream travel media.

Since a lot of people are asking how to follow in Kate’s footsteps, here is some information to help travellers. I’m not connected with Kate or the BBC – just an enthusiastic travel journalist. 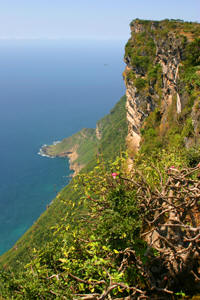 Kate started her journey in Dhofar, the southernmost region of Oman. Salalah, the Dhofari capital, is roughly 1000km south of Muscat. Several airlines fly there: from the UK, the easiest will be Oman Air from Heathrow via Muscat, or you could get a cheap flight to either Istanbul or Hurghada (Egypt) from where Jazeera Airways flies to Salalah via Kuwait. There’s a great museum of frankincense in Salalah (which also has a fantastic souk where you can buy your own), and you could follow cultural itineraries – designated World Heritage by UNESCO – to the frankincense groves in Wadi Dawkah near Salalah, as well as the ancient trading cities of Sumharam (aka Khor Rori) and Ubar. Read this superb article in Saudi Aramco World by Tim Mackintosh-Smith. The Oman tourist board is here.

Yemen is not an easy country to visit as an independent Western traveller. Its politics are unstable, its infrastructure is very poor and safety is sometimes uncertain, especially when travelling outside the centre of the capital, Sanaa. Lots of tourists visit, travel and have a great time without any problems; others run into serious difficulties. Kate went to Shibam, in the hard-to-access Hadhramaut region of eastern Yemen, then detoured to Aden, once a British crown colony (where she was taken to see a statue of Queen Victoria), and on to Sanaa. Travelling overland from Oman is difficult: regulations surrounding the land crossing change frequently. The Yemen tourist board is here, and this is a good article from The Independent by travel journalist Ginny Hill.

The difficulty with visiting Saudi Arabia is getting a visa to enter; once you’re in, travelling around is straightforward for men (women must be accompanied by a man, either a close relative or a licensed guide). Muslims qualify for pilgrimage visas. If you’re not Muslim, but you have business contacts inside Saudi, they could sponsor a visa for you. 3- or 5-day transit visas are sometimes issued, under certain conditions. Otherwise, tourist visas are restricted in number, difficult to get and very expensive.

Two UK tour companies offer Saudi Arabia. The Traveller operates cultural tours which visit key destinations such as Riyadh (where Kate discussed capital punishment with a chief of the religious police), Jeddah (where Kate was moved to tears by the call to prayer) and Madain Saleh, an ancient Nabatean trading city in the northern deserts. Regaldive operates trips to the Farasan Islands in the Red Sea hosted by Eric Mason of DreamDiver.net: Eric led Kate on a wreck dive somewhere in the area around the Farasan (and has featured in travel articles such as this one by James Montague in The Observer). You could also talk directly to Sadd Al-Samallaghi Tours of Jeddah, one of Saudi’s leading ‘inbound’ tour operators: they handle regular tour groups from lots of European countries and were credited as ‘fixers’ for Kate Humble’s trip.

The Saudi capital Riyadh’s commercial area Olaya is dominated by two skyscrapers – the Faisaliah Centre and the Kingdom Centre (also known as the Potato Peeler, or the Vest – see pic – which was where Kate met Prince Alwaleed). Kate also met and flew with ex-fighter pilot Prince Sultan (who happens to be director of the Saudi tourism authority) and Prince Bandar bin Saud, head of the wildlife commission: she was flown in a light aircraft over the desert to the Uruq Bani Maarid nature reserve and on to the ancient frankincense trading centre of Al-Ukhdood near the modern Saudi city of Najran, site of a 6th-century massacre of Christians. She went to Jeddah, exploring the Old City, and the beautiful ancient city of Madain Saleh (built by the Nabateans, who also built Petra, nearby in Jordan) and dived in the Farasan Islands.

Click here and scroll down to post no.36 for a detailed account of how an ordinary traveller secured a transit visa to Saudi in 2006 and spent four days touring independently. Here is a travel article about visiting Saudi by Mark Stratton in CNN Traveller – and here is another, by Cath Urquhart in Wanderlust.

But the best way to get into the frankincense mood is to read Petra and the Lost Kingdom of the Nabataeans by historian Jane Taylor. I’m reliably informed Jane pops up in Episode Four, to guide Kate around Petra in Jordan (along with Marguerite van Geldermalsen, author of the highly recommended Married To A Bedouin). Jane’s book is full of stunning photos and intimate historical detail about the ancient frankincense trade. (Disclosure: Jane is a friend of mine, and has collaborated on my Rough Guide to Jordan.)